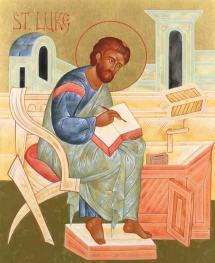 Who was St. Luke?

From scripture, we know that Luke was not Jewish but a Gentile.  He wrote the gospel of Luke and its sequel, the Acts of the Apostles in elegant Greek.  He had a concern for welcoming and his gospel is the only one to offer some of the beautiful passages including Gentiles:  the Good Samaritan in Luke 10, the times Jesus praised the faith of Gentiles in Luke 4:25-27 (the widow of Zarephath, the Syrian general), the one grateful Samaritan leper who was healed by Jesus and returned to say thank you (17:16).  Luke's life story continues in the book of Acts, where it appears that he traveled with St. Paul in many of his journeys.  He was the one loyal companion who stays with Paul.  When he is imprisoned in in Rome, Paul wrote "only Luke is with me."  (2 Timothy 4:11, Philemon 24).

Luke's gospel has a unique emphasis on care for the poor and social justice.  He alone tells us the story of Lazarus and the Rich man who stepped over him on his way to dinner every day (Luke 16). Luke balances the women and men in his stories.  The gospel of Luke is the one that gives us the lovely story of the annuniciation, when the angel appeared to the Virgin Mary saying "greetings, favored one, the Lord is with you"  (Luke 1:28).  He also offers unique stories of God's grace and forgiveness: the Prodigal Son and joyful father (Luke 15) and the forgiven woman washing Jesus' feet with her tears and drying them with her hair (Luke 7).

Orthodox tradition holds that Luke was the first iconographer, and many paintings of St. Luke show him painting the Madonna.  Many artists will have a small icon of Luke as their patron saint.  According to church history, Luke was a doctor.  In our day, we might assume that meant he was wealthy, but he may have been a slave who was trained to be a family physician.  Many hospitals are named after Luke, and there is an international Order of St. Luke committed to Christian healing.