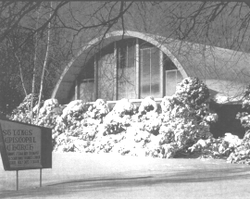 History of St. Luke's
St. Luke's Episcopal Church, originally called the Lake Edge Chapel of Grace Church began in 1947 as a mission church of Grace Episcopal Church and their first services were held in the Frank Allis school auditorium.  In 1948, the first church was built in what is now its present location of 4011 Major Avenue although it had a Lake Edge Blvd. address at that time.  The first building was based on a Quonset hut with added features (see photo) and its first service at the new location was held on June 13, 1948.  Interestingly, after World War II, building supplies were very limited and Quonset huts were available and affordable.  Fr. Patterson, who studied architectural design before entering the priesthood, provided the Quonset hut modifications to make it into a chapel.
The parish hall was built in 1960, and the new church building was built in 1970 at the same location and completed in 1971.  Although there have been additions and remodeling, St. Luke's remains much the same as the building constructed in 1970, which replaced the Quonset hut. In 1949 the name was changed to St. Luke's Chapel and later changed to its present name.  St. Luke's has a contemporary award-winning architectural design, fine acoustics and a wonderful Visser-Rowland tracker organ.
At the first service, The Rt. Rev. Benjamin F. Ivins, Bishop of Milwaukee, administered confirmation to a class of about 50 and the Rev. John O. Patterson, parish rector from Grace Episcopal Church, conducted a baptism.  Since that time, we have been honored to have the following rectors at St. Luke's.

In 2007, St. Luke's celebrated its 60th year with a huge celebration including several charter members sharing memories of 60 years at St. Luke's.  St. Luke's continues to be a vital part of the east side of Madison and has provided services and outreach for many years.  From the first services at Frank Allis school to our present building, St. Luke's has demonstrated that it is "Something Special." 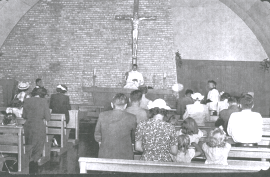